A Mother With A Purpose
By Roda Grubb

I met Minerva Aguilera by happenstance and was so inspired by her story I felt it was a great addition to my “People Stories” page. 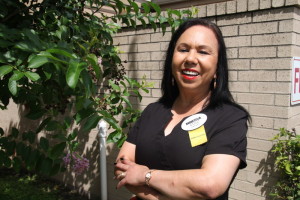 Working seven days a week can be a might tiring to the soul, or at least one might think. But, to Minerva Aguilera it was simply an act of love.

Born into a family with illiterate parents, the fourth child of five, Minerva’s parents put high value on education for their children.

“My mom would get up every morning and make us a hot breakfast before we went to school,” Minerva’s voice was full of pride and love for this special woman in her life. “She also was a seamstress, teaching us to sew, sewing all our clothes and sewing for others. She made us a new dress for special days–every holiday and the last day of school. We were poor but I never felt poor because we always had something to eat and we had clothes.”

Minerva finished school and her bachelor’s degree while simultaneously having one child and working full time. Wanting to better herself, she went back to school for her first master’s in Business Administration. While working on the MBA, she continued to work full time and had child number two!

Teaching economics and 12 other business courses was her much loved career, which led her to the thought of becoming a principal. But, first, a major development changed her life. Finding herself divorced and raising three children on her own, Minerva was determined to give them the best, which, of course, meant she would have to continue to better herself.

“It was out of necessity. I was a single parent,” she said, pushing aside any hints of heroism in her actions.

Wanting something to keep her occupied and thinking again of being a principal, she went back to school, walking away with her Master’s in School Administration. Funny thing about life–it always surprises us when we least expect it.

“I found I enjoyed teaching so much I didn’t want to give up my students. Even now, I love my students,” her voice was quiet as she told her story. She tucked the MSA away, stayed a teacher and went on with life.

When dual enrollment programs began in her Edinburg, Texas, Independent School District (EISD), Minerva was asked if she had a master’s degree in economics.

“I only needed 15 hours to obtain it since I already had the MBA,” her grin was infectious. “So, I went back and earned my Master’s in Economics.”

Since the dual enrollment meant her students would be enrolled in college and high school simultaneously, this began her career with South Texas College (STC) as a part time adjunct faculty member. Working part time from 1996 until 2004, she went full time with STC upon her retirement from ECISD,

You would think anyone with three Master’s would be satisfied after all that hard work, ready to ride the stream her career was taking her. Not Minerva.

“At one point I also had a securities license and was a financial advisor.” Laughing, she went on to explain. “I have been able to help students understand about credit cards and investing which makes me feel good that I can answer their questions in that area as well.”

While work was going well, in her private life things were not so grand.

“Two of my children had bariatric surgery. My son and one of my daughters began the journey close to 400 pounds. My son went into renal failure two years before the surgery and was bed-ridden for a whole year. When the doctor would show me his labs, I was clueless.”

During this time she prayed–a lot.

“In the midst of my prayers, I made a promise that I would go back and become a nurse,” Minerva eyes brightened. “Lo and behold, he made a complete recovery. Over time he got up from his bed and said, ‘Mom, I’m going back to work and back to school.’

“I said, ‘Praise God!’ I thought he was going to die. The surgery actually helped him in more ways. After the surgery he was able to get off his insulin. He was taking three medications for hypertension and now is down to one. Most of all, it boosted his self-esteem. For years he stayed at home, not wanting to go anywhere because of his weight. Two years ago he married a wonderful woman and moved into his own home, becoming a Licensed Professional Councilor, something he dreamed of his whole life.”

Having the surgery in 2001, her daughter’s weight today is on a slow incline as is her son’s. Minerva isn’t about to let that slide past her without doing the best she can to help these children she loves so much. But her drive to help could also be from that determination which is so strong in her soul.

“When I get started on something, I want to finish it!” she declared.

Fulfilling her promise by getting her Master’s in Nursing, Minerva made the decision to go after a life-long dream of acquiring a Ph.D. Now in her third year, her thesis will be on Post-bariatric Surgery with her hypothesis that support from family and friends is the key to maintaining weight loss. This, is turn, gives the surgery time to prove the health benefits which come from the surgery, as mentioned above.

Her first paper, Post-Surgery Support and the Long-term Success of Bariatric Surgery, has be published in Practice Nursing, a magazine of resources and peer-reviewed information for all nurses working in a general area

Minerva works her full time nursing position at a local nursing home while carrying a full load of teaching economics at STC. Seeming to be worlds apart, Minerva disagrees.

In her spare time, she follows in her mother’s footsteps, taking out her machine and sewing. Upon finishing her Ph.D. she plans on traveling to the Philippines and perhaps, Hawaii.

With her youngest daughter graduating in May of 2015, Minerva is looking forward to getting out from those financial burdens. But you won’t find her complaining or bemoaning any of her life.

“After the divorce I attended some support sessions through a church which helped me a lot. Then I read The Power of Positive Thinking. When anything negative happened, I would ask myself, ‘What would the book say?’”

Losing her parents, a sister and going through the illnesses of her children has made a deep impression on Minerva, giving her compassion and empathy for those around her. Those times she’s ready to cry uncle, it seems God gives her a little nudge.

Take, for example, the time she was at the gym, so tired she didn’t think she could continue. Looking across the gym, her eyes landed on her inspiration.

“There’s this young man with an artificial limb on the treadmill. That was inspirational to me. This young man was not giving up and neither was I!”

Life is either a daring adventure or nothing at all!